Did you ever try to stream audio over AirPlay to an AirPort Express that was already playing audio from some other device? If so, I’m pretty sure you’ve experienced the dreaded AirPlay Speaker Not Available error message. 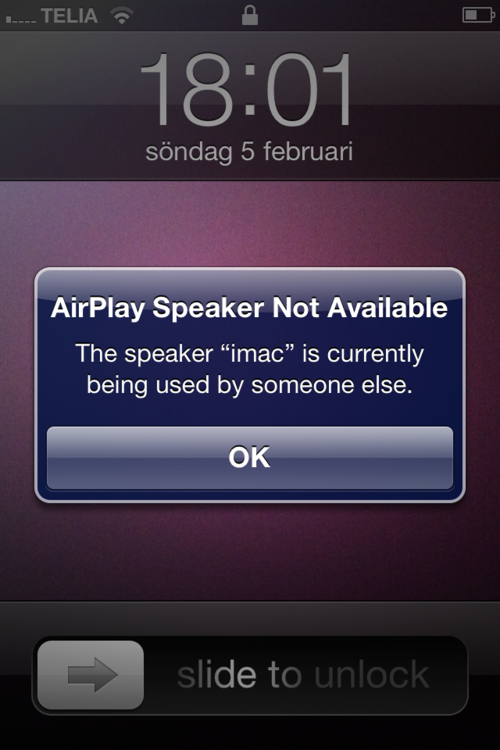 You’re just about to file this in the “this is just how it works” category, but since you’re such a curious animal you can’t let this one go that easily… I mean, what would happen if you tried to perform the same operation with a video stream instead of an audio stream? You pick up your iPhone and start streaming some random video to your Apple TV. Damn, isn’t that picture just so sharp? And the lag? Barely noticeable! Oh darn, forgot that you were still here. Please pick up your other iDevice and try to select the Apple TV as the device that should be playing that new video from M.I.A.

Ain’t that just magic in a box? The Apple TV will simply disconnect device A and let device B stream (to it) until you try to stream something from device A again.

This doesn’t make you any wiser, but (and I have to agree that this is a wise choice) you conclude that this experiment needs a final test - what about performing the original test (audio) using the Apple TV instead of the AirPort Express? Holy moly - it behaves just like it does with video streams!

I’m not sure how to wrap this up. Obviously, there exists a superior solution (auto disconnection of the old device when a new device tries to stream), but Apple seems to have forgot to backport this behavior to the AirPort Express…

Since this is not a real world™ problem that causes any harm to human beings, I’ll just let this one go for now. I mean, there are other problems that are more important than this one. Right. Right?