Update October 12, 2011: iOS 5 is now readily available for public consumption, and it solves a part of the problem - you can now figure out how much space each and every application is occupying (original post below image): 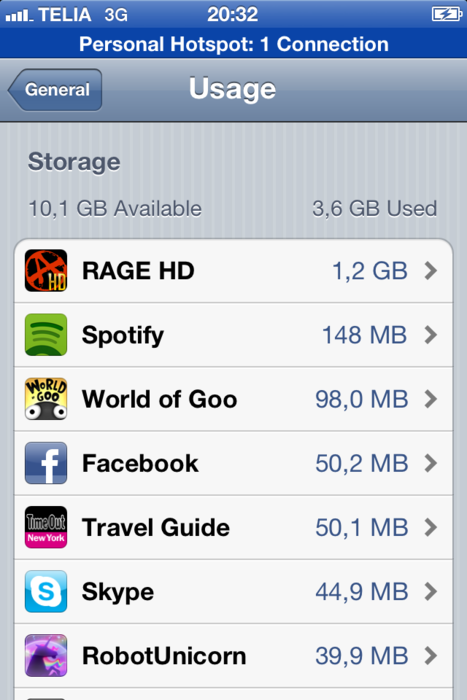 Update April 5, 2011: iTunes on my computer will show me storage space per class (different classes from what my phone shows, but hey). Given that I now know that my applications occupy 12 GB, I still can’t figure out which one(s) I should remove, since iTunes only displays how big the binaries are - not how much space each app + its support files occupy.

I, for one, salute our overlord and übermaster Steve Jobs. “But”, you might say, “what’s your problem then”? Problem is that I don’t like saluting all day long.

Nah, my problem is that the überlord himself seems to have an infinite amount of storage space on his iPhone, and hence he has never ran into a low disk space warning (yes, some applications warn you when there’s not enough free space on the iPhone for them to be able to function correctly).

This itself isn’t really a problem - it’s natural for drives to fill up. My primary concern is rather that Apple seems to have forgotten that I might want to know what I could/should delete if I wanted to reclaim some space on my device.

Or maybe Steve Jobs thinks this will help me: 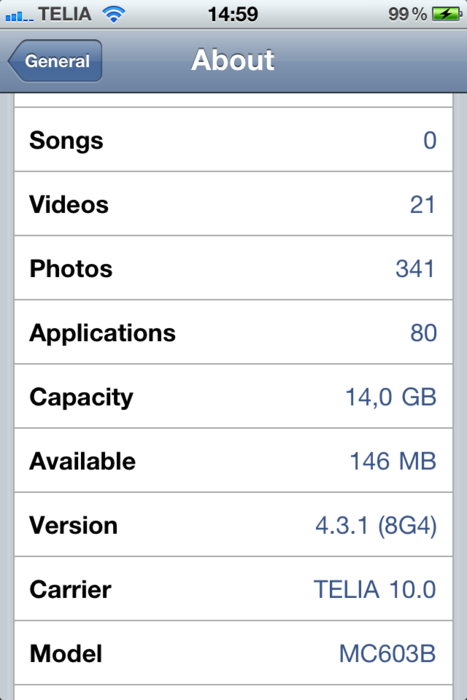 Let’s think about this for a while…

Done? Ok, let’s analyze this then! Apparently, I’ve got 14 GB of storage space, but everything but 146 MB seems to be used for something already. This something might be songs, videos, photos or applications.

So, why don’t Apple tell me how much storage space my 21 videos take? Is it more in total than my 80 applications? Or are my photos the culprit here (meaning they’re the single item occupying most of the space)?

If someone at Cupertino is reading this, please consider telling me the storage space per class (like Photos - 342 in total, 2,4 GBs), and for the sake of God - please add a subview for Applications where you show me the space each applications takes (including caches and support files).

That’s all Steve (I’m not asking for that much, right?). KTHXBYE.